Well, no you can't - but LinkedIn thinks we need help in engaging with other users, so hot on the heels of including emoji in the messaging app, the professional networking giant is trying to make it easier than ever to talk to people.

The ready-made 'conversation starters' are personalised and it's this that will apparently make it "less intimidating" when contacting someone.

So, in one fell swoop LinkedIn has managed to make us even lazier when engaging with people.  Goodness me, we now don't even need to read their profile to learn more about someone.  And people wonder why LinkedIn isn't the powerhouse of lead generation that it can be.

For example, one of the single biggest mistakes that most people make on LinkedIn is not customising connection requests, yet it is so easy to do both on the desktop and mobile versions of LinkedIn - and if you want something to say that goes beyond "I'd like to add you to my professional network on LinkedIn", simply read their profile!

And when you do read their profile the chances are you will find something in common:

Some of the so-called conversation starters do indeed have relevance to the person you want to contact, but most users would get a lot more out of LinkedIn and the networking possibilities on the site if they took the time to a) read people's profiles and b) send proper customised messages.

It's great that LinkedIn is making itself look more up to date, but ready-made connection messages is not the way forward.  In short, make the effort to engage properly - don't be lazy!

Much of the best networking on LinkedIn is based on finding common interests with people, which lead to dialogue - which in turn starts to build relationships - which often leads to a coffee down town - which in turn can lead to business being done.

So perhaps LinkedIn should go the whole hog and let us skip the tedious job of showing real interest in people and having to write time-consuming messages, and just focus on introducing ways to get us into the nation's coffee shops as quickly as possible.

“Now, members can spend less time figuring out what to say, and more time having conversations that help them get ahead and reach their professional goals,” the company remarked. 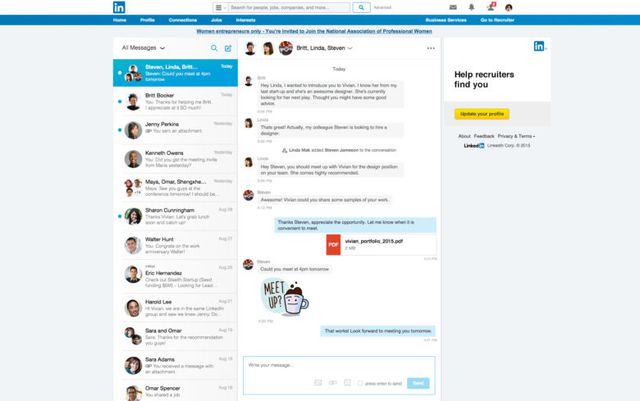