The London TV news yesterday was dominated by a story about three hundred years of tradition being banned at one of the City’s oldest institutions.

Gone, in an instant – no more drinking at lunchtime if you work at Lloyd’s of London. Apparently, this falls into line with ‘industry norms’ and news bulletins were suitably accompanied by photos and video of allegedly ‘boozy’ workers congregated outside drinking establishments in Leadenhall Market. Proof if ever needed that the insurance industry was heading down the toilet.

I never worked at Lloyd’s of London but I knew many who did, because two large insurance companies with flagship offices in the City were my places of work for a great many years. And yes, lunchtime drinking formed a large part of my time in the City. I remember having quarterly appraisals there and occasional ‘pep talks’ from my boss and he always paid. When I became a senior manager, I paid. That’s how it worked.

What was interesting was that having a pint or three at lunchtime wasn’t in any way viewed as an indulgence – it was just part of day to day work. In the early days for me – and we’re talking the late seventies and early eighties, my boss would take me to meet brokers in pubs that had strippers too – that aspect of City lunches does however seem to have gone today (unless you know better).

During my teens, I travelled to school on the train line which transported many commuters to their jobs in London. The train was nicknamed the ‘Bognor Boozer’ because beer, tots of whisky, brandy, hot toast from the buffet and card games in smoke-filled carriages were normal even before arriving at work. Fortunately, the politically correct world of HR never got their teeth into that one.

It goes without saying that productivity during the afternoons would occasionally be challenging for certain types of work in the City, but for many of us the work that got done in the various pubs and later the wine bars was indeed highly productive. Clearly it depended a lot on how you defined ‘work’ and what your job role was but as far as I can recall, every single person in our office, including very senior management went to the pub several times a week. And it was easy for us because one of the pubs we frequented was in the basement of our office.

Whilst Lloyd’s assertion that alcohol is involved in a high proportion of disciplinary issues is a concern, this ban does remind me of some years later when Social Media first started to become commonplace – so much so that more and more employees in organisations around the country were logging in throughout the day to enjoy this new type of networking.

I remember a news item around then which highlighted a few firms that had decided to ban access to Social Media during working hours because it was “clearly impacting productivity”. Before you knew it, companies everywhere were suddenly blocking access to Social Media, citing productivity issues, security concerns, brand reputation, disparaging remarks.  You name it, Social Media in the workplace needed to be stopped – and quickly.

More enlightened commentators frowned sagely at the time, quite rightly pointing out that by suddenly blocking access to Social Media in the workplace, HR departments were preventing networking opportunities and many other potential benefits to the organisation. But most companies saw it as too much of a risk and put their foot down firmly.

Today, in a more enlightened age, companies have Social Media policies in place, with many now seeing the use of tools such as LinkedIn, Facebook, Twitter etc. as valuable tools for sales and marketing, networking and to foster employee motivation and engagement. True, it is the case that many companies do not yet allow all employees to tweet ‘on behalf’ of their organisation, but with training there’s no reason why this can’t and won’t become a reality for all in due course.

Whilst admitting that lunchtime drinking had indeed been traditionally part and parcel of the London market, somewhere in the responses from Lloyd’s was a comment that ‘the market had changed and that they wanted to attract younger people into the industry’.

When I started in the City in the late 1970s, I was a younger person too. But it didn’t take me very long to realise that daytime refreshment was actually a core part of the job. Anyone could see from the sales figures that the people who did the most socialising were in fact the most productive – and this was the case around the country too, not just in London.

There’s a parallel here too with Social Media use. Prolific users of Social Media, particularly those with a clear plan and strategy, often have large networks of contacts, positioning them better than most to benefit from online ‘socialising’. They don’t view Social Media as a sales tool – they view it as a tool to foster greater communication and engagement, a happy product of which can be increased sales.

True, this is no longer 1978 and the world of work has changed, mostly for the good. Lloyd’s recent announcement is of course great news fodder, but for me it brought back wonderful memories of working in one of the most exciting markets in the world. I made some great friends, many of whom are now part of my business network and with whom I’m able to keep in touch through Social Media.

And on days when I visit the City, I have a wry smile on my face when I see both young and older City workers crowded onto the streets outside public houses at lunchtimes. The East India Arms on Fenchurch Street was a favourite and it’s great to see it still thriving today.

Long may ‘social networking’ continue to thrive in the heart of the City. 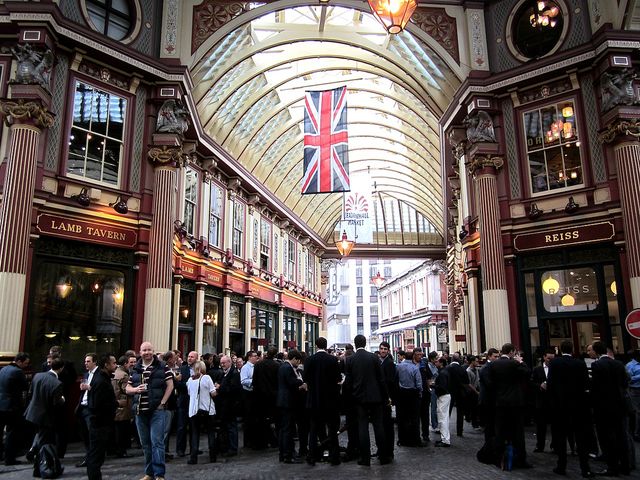 I bet we both smiled when we heard about this, eh @clivewaller !https://t.co/ZHvnWL49rG